Many people might not associate world music with Flanders. Nevertheless Flanders has a flowering modern folk scene! As Belgium has always been a crossroad and Brussels became the capital of Europe, the country has been like a sponge, readily absorbing expressions from east to west and north to south in the own musical language. Beside many talented native musicians Flanders became a new home for many foreign musicians, which generates beautiful collaborations.

This compilations is the first in a series of world music from Flanders. World music, the world in our music or the music in our world? The cd presents a lively mix of adventurous groups from several musical directions but which are related by their interest for traditional music from all regions. The selection of these bands has been made by specialists in the field: journalists and promoters.

We hope that the Belgian crossroad will become a point of departure for intercultural dialogue. 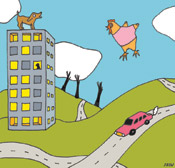