The Prometheus Ensemble was founded in 1993 by conductor Etienne Siebens. It consisted of 15 instrumental soloists, each of whom was at the forefront of the Belgian classical music scene. The excellence of the performers and quality of their performances, along with the diversity in programming and often-daring combinations of familiar and lesser-known music, has given the ensemble its reputation.

Prometheus ensemble was the first ensemble in Belgium to produce well-thought-out programmes, combining the classical and the contemporary languages. Their main focus was music from the first half of the 20th century but it also worked on projects bringing together diverse art forms. Among these several musical theatre productions and the acclaimed opera “The woman who walked into doors” by Kris Defoort. The Prometheus Ensemble has been in residence in arts centre Flagey, Brussels. 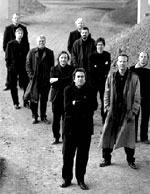