For decades already the Huelgas Ensemble has been one of the most renowned groups for the performance of medieval and Renaissance polyphony. The name refers to the Spanish Cistercian monastery near Burgos, where founding father and conductor Paul Van Nevel at 24 studied the legendary Huelgas manuscript. He founded the group in 1971 at the Schola Cantorum in Basel, Switzerland. A year afterwards the – then still tiny – formation was proclaimed laureate of the competition for ensembles at the Flanders Festival-Bruges. Ever since the ensemble has been on the move and keeps surprising with original programmes and with the impeccable tonal execution of works that are often unknown, discovered by Van Nevel in libraries all over Europe. Their interpretations are based on a thorough knowledge of early performance practices. Press and media acclaim the lively spontaneity and the extraordinary clarity with which the Huelgas Ensemble brings its repertoire and with which it constantly sets new norms. The group’s record of achievements is impressive: the appearance of almost every CD was a revelation and awards were showered on the overwhelming majority of the more than fifty recordings. 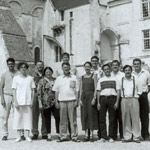