Il Fondamento was founded in 1989 by oboist Paul Dombrecht. Together with a group of dedicated musicians he developed a warm, transparent orchestral sound coloured by his laurelled baroque oboe. Twenty years later the orchestra can boast a firm international reputation. Paul Dombrecht specialised in a historically informed performance practice, being partial to adding lesser-known works to the great repertoire. Thus his programming includes composers such as Heinichen, Zelenka, Fasch, Fux, Abel as well as Händel and J.S. Bach, or alternates rarely performed works of Telemann with more familiar compositions of his. In this way several unpublished and unjustly neglected little treasures have been saved from oblivion, most of them subsequently appearing on CD. Il Fondamento has been invited to a wide range of festivals both in Belgium and abroad, as well as being a guest on the great concert venues in Valencia, London, Vienna and Madrid. In 2008 the orchestra toured through the U.S. and Canada. 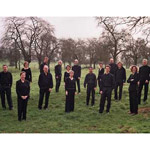