Since her prize in the Belgian Dexia Classics competition in 1975, Viviane Spanoghe has pursued her career with passion and discipline. She began her studies with André Messens at the Conservatorium of Gent, before moving on to the Folkwang Hochschule in Essen to work with Maria Kliegel and Janós Starker. In 1979 she crowned her studies, again with Starker, at the Indiana University Bloomington. Upon her return to Belgium in 1980, she was a laureate of the “Tenuto” competition, and since then has performed as a soloist both at home and abroad, with such renowned conductors as Lawrence Foster, Janós Fürst, Leopold Hager, Jan Latham-Koenig, Jean-Pierre Wallez and Dirk Brossé.

A passionate chamber musican, she has worked, among others, with the late Urszula Gorniak, Levon Chilingirian, Tatiana Samouil, François-Joël Thiollier, Ronald Van Spaendonck, Francis Orval and the Bellerophon ensemble. Viviane Spanoghe is also a member of the Aleko trio, together with violinist Alexeï Moshkov and pianist André De Groote. De Groote has been her principal partner since 1981, and together they have given concerts in Europe (notably, in the Beethovenhaus), as well as in Japan and Africa.

Her many recordings – for labels such as Naxos, Talent, Adda, RGIP, Marco Polo and Et´Cetera – all reflect her powerful personality, and have received international critical and public acclaim. Capitalising on the delicate and subtle sonority inherited from Janós Starker as a reaction against romantic excess, she has managed nonetheless to emancipate herself from any one school of playing, and established a style in her own right, unambiguously affirmed by her 1984 interpretation of the two Shostakovich concertos (with the Sofia Soloists Symphony Orchestra under Emil Tabakov), to this day a benchmark recording of the repertoire.

Viviane Spanoghe aims to unearth and publicly promote some of the more obscure works for cello, as well as to perform new compositions. Her extensive repertoire reaches from the Baroque, through film music, to music of other cultures. Several composers – August Verbesselt, Franklin and Jean Gyselynck, Peter Swinnen, Jan Van Landeghem, Marc Matthys and Frédéric Van Rossum, among others – have dedicated works to her, many of which she has recorded.

Professor both of Cello and Chamber Music at the Royal Conservatorium in Brussels, Viviane Spanoghe pursues her art and her pedagogy within a holistic framework, based on a broad view of humanity, music and society. As the French composer Sophie Lacaze has put it: "Vivane Spanoghe´s approach to making music – regardless of its era – founded on emotion, together with a mesmerising sound, deep sensitivity and a sure technique, produces performances of great intensity". 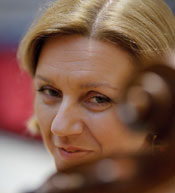