HERMESensemble is an Antwerp-based collective for contemporary music and art. The repertoire and performance practice of the classical avant-garde are the starting points of the productions, but the ensemble consciously strives to cross artistic borders; on the one hand it searches for confrontations with early music, popular and world music, on the other hand it investigates synergies with other disciplines such as (music) theatre, the fine arts, video, film and multimedia. Many of the events explicitly have a visual character (old films or new media), and often take place at an unusual, appropriate location (e.g. sculptures by Anish Kapoor, industrial architecture...). The productions feature new music by composers such as Cage, Sciarrino, Saariaho, Feldman, Fedele, the Belgians Luc Brewaeys, Frédéric D’Haene, Wim Henderickx, and young talents such as Thomas Smetryns, Jelle Tassyns, Bram Van Camp and Annelies Van Parys.

HERMESensemble performs regularly in the mayor concert halls in Belgium. The ensemble also met with critical acclaim in The Netherlands, Paris, London, Venice, Vienna and Luxembourg.
HERMESensemble is an ensemble in residence at AMUZ. 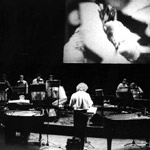