Countertenor Patrick Van Goethem’s first steps of his singing career were taken at the famous boys choir Schola Cantorum Cantate Domino conducted by Michaël Ghijs. He specialised in baroque music with Paul Esswood, Julia Hamari, and Andreas Scholl. As a soloist he is much in demand, working with famous conductors such as Ton Koopman, Frans Brüggen, Masaaki Suzuki, Peter Neumann, Gustav Leonhardt, Jos Van Veldhoven, Reinhard Goebel, Helmuth Rilling, Lars Ulrik Mortensen, and many others. Patrick Van Goethem collaborated on numerous CD productions with works by Bach, Zelenka, Händel, and Buxtehude. He has been invited to the great European festivals and made his debut in the U.S. in 2005. On the agenda for 2009 are, among others, a European tour featuring Bach’s Mass in B Minor, with Frans Brüggen’s Orchestra of the Eighteenth Century. In addition to his career as a concert singer, he also performs with his own ensemble The Flanders Baroque Consort. 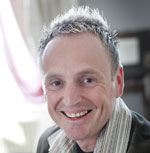