George De Decker trained as a pianist at the Royal Conservatorium in Antwerp and studied composition under Willem Kersters in Antwerp and André Laporte in Brussels. Between 1975 and 1980, he wrote music for the IPEM in Ghent under Lucien Goethals. His work "Lineas y puntos" for symphony orchestra and tape won him the Tenuto composition contest in 1980. His oeuvre consists of solo works (usually with tape) as well as works for a full symphony orchestra. He has composed for film & television (drama series and art documentaries for VRT), theatre (e.g. De Tijd) and dance (o.a. Bud Blumenthal/Fernando Martin). De Decker currently teaches Sound Design at the Royal Academy of Fine Arts in Antwerp (dko) and is guest lecturer at the Royal Conservatorium in Antwerp.

George De Decker also became absorbed in the world of visual arts from a young age. He studied art history at the Royal Conservatorium in Antwerp and painting at the Academy of Fine Arts in Anderlecht under Guy Leclerq. He has been the subject of both group and solo exhibitions in several countries. His visual work is represented by Galerie Van Campen & Rochtus (Antwerp, B) and Galerie Bianca Landgraaf (Laren, NL) 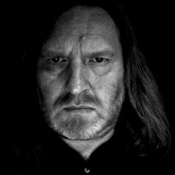