Ludo Geloen (°1962 Dikkebus) is since 01/09/08 director at the School of Art (Music Department) at Poperinge (earlier, he was teacher of organ music at the conservatories of Ieper, Diksmuide and Poperinge); he is also organist of the O.-L.-V.-Middelareschurch in Ieper . He is the conductor of the O.-L.-V. Middelareschoir.

He is carilloneur in Ieper, a composer and improvisor. He studied at the Royal Conservatory in Gent and carried off prizes over and over again. As an organist and a carilloneur he does concerts in Belgium and abroad (The Netherlands, France, Germany, Italy and Russia). On his repertoire, he has pieces of all styles, with a preference for modern music. He played already a lot of creations. In 1997 he founded “The Organ Circle” - Organum Yprense – a non-profit association, which promotes the organ music in the Westhoek (The western part of West Flanders). His own works were performed in Europa, Rusland, Canada.
Since 2001 he is the artistic director of the ‘Organ Circle Diksmuide’, a non-profit association.

At the Royal Carillon School “Jef Denyn” in Mechelen he obtained the laureate diploma in carillon music.
In 1999 he released a CD and played the three most important organs in Ieper and he won the B.A.F. Sabam prize with the composition “Tension and Relief”. He became laureate in organ and in composition in Terneuzen and Utrecht in that order.
Since 1998 he and Koen Cosaert are a carillon duo: “Four Fists”. He is editor in chief of the cultural e-zine (magazine) “Het HemelBed”. Since 2003 he and Barbara Vandendriessche, founded a duo for soprano and organ: ‘Duo Calliope’. He composes for orchestra, choir, carillon, organ, piano and al kinds of chamberensembles. 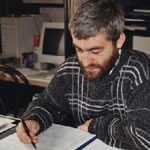