Louis August Edmond Hendrik De Meester was born on 18 October 1904 in a Francophone, liberal family in Roeselare. From a young age he took lessons in violin and piano, as well as solfège, although he would never receive a traditional musical education. From 1923, the composer started to earn his living by playing in cafés. He also played music for silent films and for balls and parties; this would form the basis of his later interest in functional music and music for film, plays and ballet.
In 1927 he went to France to pursue the same career, moving on to Morocco two years later and there signing a contract to play jazz at the “Café de la Paix”. He also did the administrative work in a music school in Meknès, where he was offered a position as a music teacher. De Meester never received formal musical training, but taught himself music theory in six weeks. After two weeks of teaching, he became director of the school. In the context of his duties as director, he met Sergei Prokofiev, Maurice Ravel and Francis Poulenc. In the same period he became a member of the Belgian artists’ rights association, SABAM (then known as Navea, the National Association for Artists’ Rights).
The composer returned to Belgium in 1937 in order to complete his studies as a composer. He took lessons in counterpoint with Jean Absil, the only formal musical training which he would ever follow. At the end of the Second World War, after a successful entrance exam, De Meester took a position at the NIR (the Belgian Broadcasting Corporation) as a music producer. At this time he met the “Groupe des Six” - Darius Milhaud, Francis Poulenc, Georges Auric, Louis Durey, Germaine Tailleferre en Arthur Honnegger – as well as Igor Stravinsky. These composers did not have a direct influence on him, however. While at the NIR (which became the BRT after the war), Louis De Meester, who had now abandoned his pseudonym of Louis Master, experimented in electro-acoustic music in the radio studios together with David Van de Woestijne.
In 1954, De Meester won his first major prize, the Italia Prize for documentary, with Le soleil se lève sur un monde. Three years later he won the same prize again for the category of radio, with his radio-opera, De Grote Verzoeking van Sint-Antonius (The Great Temptation of St Anthony), in which electro-acoustic techniques were applied. In 1961, De Meester was invited to become the artistic director of the IPEM (the Institute for Psycho-acoustics and Electronic Music) in Ghent. The institute was officially opened one year later.
De Meester helped to found the composers’ group SPECTRA in 1963. He won the Sicily Prize (as part of the Italia Prize) for his opera Twee is te weinig, drie is te veel (Two is not enough, three is too much). From 1969, De Meester officially went into retirement, but remained active at the IPEM. He was a two-time winner of the Visser-Neerlandia Prize, in 1970 and 1973, for Marine and Concertino respectively. In 1979, he won the Staatsprijs for Composition, awarded every five years, and one year later he received an honorary doctorate from the Rijksuniversiteit Gent.
De Meester’s last activities cover the period from 1984 to 1987, when he produced arrangements for the Nieuwe Muziekgroep, an ensemble conducted by Mark De Smet, one of the composer’s former pupils. Louis De Meester died on 12 December 1987. 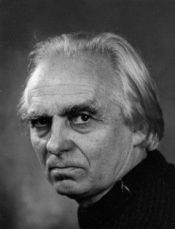