Erika Budai  received her first choral training at the age of six, concerting with several choirs in Hungary and the United States of America. She studied Latin-mathematics at the Humanities. In the mean time she received her first musical training at the Academy of Music in Tienen, where her classes included solfège and harmonics under Ludo HULSHAGEN, violin under Yvonne DISPA and piano under Thérèse WAGEMANS. At the age of 18, she graduated for piano receiving the Golden Medal of Tienen and the Belgian Silver State Medal.

Erika Budai started her music studies at the Lemmens Institute in Leuven. She studied piano with Levente Kende,  joined the singing class of Dina Grossberger as well as the traversal flute class of Carl Lenski.
She joined SABAM, the Belgian Society of Authors, as composer and author in 1986.
Since 1990 she has studied at the Royal Music Conservatory in Brussels, where she received First Prizes in music theory, music history and harmonics under Marcel De Jonghe, electronic music under Eric Feremans and film music composition under Walter Christian Rothe, film music-composer in Hollywood.

Erika BUDAI won First Prize in the "Music Competition for Young Composers" in Brussels, in 1992 as well as in 1993. She pursued further studies in counterpoint and fugue under Ludo Claesen, receiving additional training in composition and orchestration from Kurt Bikkembergs and Piet Swerts.

With a scholarship, Erika BUDAI attended master classes in composition in Darmstadt (GERMANY) in 1996. These classes where conducted by Karl-Heinz Stockhausen, Wolfgang Rihm and Brian Ferneyhough, among others. She also joined master classes in the international choir under the batton of the British conductor Sir Timothy Brown (Mount Scopus University of Jerusalem, Israel 2010)

As a composer, Erika BUDAI has received commissions for a number of compositions, including works for the Belgian Radio and Television Choir directed by Vic Nees and Johan Duijck. She currently has some 140 compositions to her name, mostly choral and chamber music pieces. Her composition works are mainly edited in Belgium and the Ntherlands.

As a co-operator of the Antwerp Concert-Association "Crescendo", Erika BUDAI works since 1999 as a choir-conductor in Berlin (Germany) and in Pontmain (FRANCE). 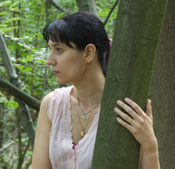