Dirk De Nef was born in 1957 in Ghent. As a boy he sang in a choir and played guitar. It was only at the age of fifteen that he took an adult course in solfège at the Municipal Conservatory in Mechelen. He earned first prizes in solfège, harmony, choral conducting and music history at the Royal Conservatory in Antwerp. At the Royal Conservatory in Brussels he received first prizes in counterpoint and fugue with Rafaël D’Haene, composition with André Laporte and advanced music analysis with Frans Geysen. De Nef began composing only in 1990 – relatively late – but soon won a considerable number of composition prizes. In 1992 he won second prize in Harmonia-Nederland with Geef mij maar de brede, trage rivieren (Give me the broad, slow rivers). In 1993 his composition Lucubrantiunculae was awarded third prize in the Muizelhuis Competition for chamber music. A year later, De Nef won the same competition with Circumsonus for violin and piano. In 1995 his composition Rond’eau was the compulsory work for the semi-finals of the Queen Elisabeth Competition for piano. In 1996 he won a prize from the Royal Academy for Sciences, Letters and Fine Arts of Belgium. Dirk De Nef has to date composed two works for large forces: Stained Glass (1999) for concert band and the oratorio Rodian (2001) for symphony orchestra, mixed choir and soloists. He teaches composition at the music academies of Bornem and Heist op den Berg and harmony at the Lemmens Institute in Leuven. De Nef is also active in the choral world, conducting the University Choir UKA at the University of Antwerp, the Royal Choral Society Arti Vocali in Antwerp. He himself sings in the vocal quartet Kompact. 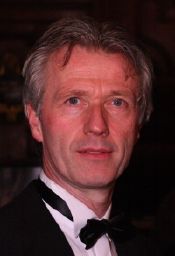