Jazz trumpet player Bert Joris (Belgium, 1957) put Flemish/Belgian jazz on the map and his name is bracketed with other national jazz legends like Toots Thielemans and Philip Catherine as well as other well-known contemporary trumpet players. Joris has not only built up a solid reputation as an improvisor but also as a composer, arranger and teacher. His compositions are played by orchestras from all over the world and the name Bert Joris has become a style and a brand. A big part of the recognition for his work he owes to his receptiveness towards other expressions of art. Though his film scores and works for symphony orchestras are of an exceptionally high level, Bert Joris remains himself: recognizable, personal and always with a blue note.

Born in Antwerp (Belgium) in 1957, Bert Joris receives classical lessons on violin, piano and acoustic bass. He starts playing trumpet at the age of 14. He then gets interested in Jazz and rapidly becomes one of the top jazzmen in Belgium, known for his warm sound and his lyricism.

Bert Joris is playing all over the world with with many different combo’s and musicians such as: Philip Catherine, Enrico Pieranunzi, Michel Herr, Lee Konitz, Charlie Mariano, Woody Shaw, Hank Jones, Mel Lewis, Jimmy Cobb, Marc Johnson, Ira Coleman, Hein van de Gein, Marc Moulin and many others. Bert Joris is also working as a Big Band leader and composer. He writes regularly for the Brussels Jazz Orchestra and appears often with them as a soloist.

Since 2000 Bert is touring and recording with his own quartet with Dado Moroni (piano), Philippe Aerts (bas) and Dré Pallemaerts (drums).  Their recording “Magone” (Dreyfus records) was awarded several times : Disque d‘émoi, Choc and the Klara music award.

In 1996 he receives the prestigious prize “DJANGO D’OR” and in 1998 he is chosen by Belgium public and critics as the best Jazz trumpet player of the year. February 2010 Bert Joris was awarded the Flanders Cultural price 2009 in the music category. In 2012 the Antwerp Conservatory Foundation made him "Maestro  Honoris Causa".

Bert Joris is also a worldwide respected pedagogue. In Belgium he was at the source of the jazz departments in Leuven, Brussels and Antwerp. In Holland he taught at the Hilversum Conservatory and in Bern he is running since 23 years a very successful trumpet class and Big Band. 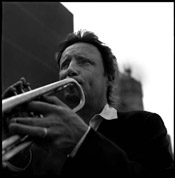