Ben Sluijs followed a 5-year classical saxophone training. During that period he also participated in various classical summerworkshops in Libramont (Belgium) where he was taught by Francois Danneels, Norbert Nozy, Willy Demey...

Since the age of 15, Ben's fascination for jazz had grown and after finishing the classical school in excelence, he started a 4-year training at the Antwerp Jazz-Studio where his teacher was John Ruocco. He also studied 1 year on the conservatory of Brussels with Steve Houben and took a workshop with David Liebman in the US (2004)

Ben teaches now himself at the conservatorium and the academy of Antwerp. 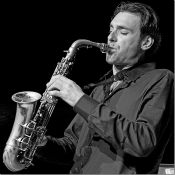