Trumpet player Bart Maris pops up in a multitude of project pools and groups that are outside of the mainstream.

Bart Maris (°1965) is a musician from the outskirts of jazz. It's not that he doesn't like the downtown club scene. It's that Maris enjoys the arguments and discussions with different genres and different musicians too much, to be able to choose one particular course. It isn't surprising then that he pops up in a multitude of project pools and groups that are outside of the mainstream.

He becomes entangled in a frenzied affair with two Moogerfoogers and a loop machine, in a solo performance.

With the band, Electric Barbarian he doesn't hesitate in merging hip-hop with a distorted trumpet.

With the quartet Kamikaze he mingles improvisation with rock – something he also does with 69, a double-trio consisting of two horns, two double basses and two drum kits.

With FES he took on the persona of Satchmo for the CD, ‘The Armstrong Mutations’.

Then he hooks up with Moker, a band that swings like a rolling egg, certainly not unwilling to serve up a bit of Ellingtonia and equally enthusiastic about swerving off into some minimalist free jazz. Life can be thoroughly exciting on the outskirts. 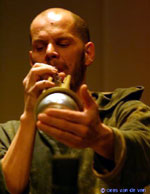