Tony Nys started playing the violin at the age of five. A student of C. Quatacker and later P. Hirschhorn at the Brussels Royal Conservatory, he graduated as Master of Arts 1997.
He also studied violin with S. Gawroloff (Cologne) and C.A. Linale. During that time, he was a member of the World Youth Orchestra and the Gustav Mahler Jugendorchester, which allowed him to play under the baton of I. Fischer, C. Abbado, P. Boulez,…
In 1997, he switched to viola to be admitted to Quatuor Danel, with whom played during 8 years and made regular appearances at major festivals in Europe, Japan, Latin-America, and Russia as well as at Wigmore Hall in London, Concertgebouw in Amsterdam, and Villa Medici in Rome. The quartet has repeatedly performed the Beethoven, Bartok and Shostakovitch cycles. Nys has also worked with composers like H. Lachenmann, W. Rihm, I. Fedele, and many others. His collaboration with the Danel quartet has resulted in an impressive discography.

Tony left the quartet in September 2005 and is currently active in various ensembles.
He is frequently asked to play solo viola with the Frankfurt radio symphony orchestra.
He recently recorded a CD with music by Schumann and Kurtag for Klara radio (Belgium), together with Benjamin Dieltjens and Jan Michiels. 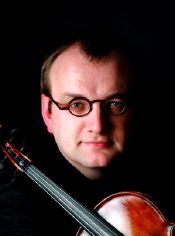