Marnix De Cat studied organ, voice and percussion at the Lemmens Institute. Since 1996 he has been one of the four permanent core members of the Capilla Flamenca, participating in its worldwide tours. He is also a permanent member of the Gesualdo Consort Amsterdam and regularly collaborates with the Huelgas Ensemble, the Ricercar Consort, the Collegium Vocale, Currende, Il Fondamento, and Bl!ndman. In addition he has been raising his visibility as a soloist as well as performing with conductors such as Gustav Leonhardt, Philippe Herreweghe, Jos Van Veldhoven and Manfred Cordes. Several modern dance performances co-opted him as a singer for their tours, among others: Iets op Bach, Foi, and Bâche. To cap it all, Marnix De Cat is also active as a composer and as conductor of the Pluto Ensemble, founded by him in 2009. 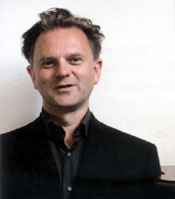