The belgian artist Inge Van de Kerkhove started out as a piano student at the Royal Music Conservatory in Gent (Belgium) before taking up singing and opera-class. In June 1999 she obtained the degree Masters in Music with highest honours and in the same year she won the first prize at a singing-competition organised by Rotary Belgium. She continued her studies with Barbara Schlick and in the mean time followed masterclasses at the Flanders Opera Studio with René Jacobs, Robert Carsen and Guy Joosten.
Van de Kerkhove made her debut in a production of Caccini’s “La liberazione di Ruggiero dall’isola d’Alcina” with the orchestra Musica Antiqua Kölln. Next, she sang with the ensembles La Petite Bande, In Stil Moderno, Nuova Prattica and the chambermusic-group Het Collectief.
Recenlty she recorded Graun’s “Der Tod Jesu” conducted by Sigiswald Kuijcken for the label Hyperion. 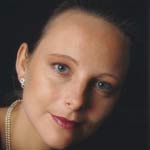