Hans Aerts studied clarinet and piano at the Music Academy in Mol. After earning 'governmental medals' (regeringsmedailles) for both instruments, he continued his studies at the Royal Conservatory in Antwerp, where he took lessons with Walter Boeykens (clarinet), Marc Verhaegen (harmony) and August Verbesselt (analysis). He continued his studies at the Royal Conservatory in Brussels, taking counterpoint and fugue with Rafaël D’Haene. He rounded off his studies with Piet Swerts (composition) at the Lemmens Institute in Leuven.
Since his graduation, a number of his works have received prizes. In 1984 he was given an honourable mention at the Clarinet Choir Composition Contest of the University of Maryland. In 1993, 1995 and 2005 he was a prizewinner in the Cantabile Composition Competition for the three piano works Berceuse triste – Canzonetta (1993), Rondino (1995) and Promenade (2005). In 1999 his song Tranen (Tears), on a text by Guido Gezelle, for soprano, clarinet in b-flat and piano (1998) was selected in a competition organised by the city of Roeselare.
Hans Aerts composed At the lake of Connemara for harp (1995) and Contemplazione for violin and piano (1996) as the compulsory works for, respectively, the 1996 and 1997 editions of the Axion Classics National Competition for Music and Spoken Arts, organised by Dexia bank. Composing for the same competition, in 2004 he wrote Concertino da camera for woodwinds (flute, clarinet, oboe, alto saxophone and bassoon) and piano. The piano work Sentimental Waltz was nominated in the ISME Composition Competition in 2003 and released on CD.
At present, Hans Aerts is active as a composer and a teacher of clarinet and chamber music at the Municipal Academy for Music, Word and Dance in Turnhout. 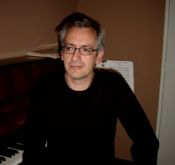