Ignace Michiels studied organ, piano and harpsichord at the Academy of Bruges, his home town. In 1986 he was prizewinner at the Institute Lemmens in Louvain. He then successively improved his talent as a musician with Robert Anderson at the Southern Methodist University in Dallas, at the royal Academy of Brussels with Herman Verschraegen and with Odile Pierre at the Paris National Conservatoire where he obtained the highly appreciated Prix d' Excellence. He also obtained the Higher Diploma of organ music at the Royal Academy of Ghent.

Ignace Michiels has taught Analysis at the Royal Conservatoire of Ghent and has recently been appointed as professor for organ at the same institute. He also teaches organ at Bruges academy and is organist at the Saint-Saviours cathedral in the same town.

His repertoire includes the complete works of Bach for organ, Franck, Mendelsshon, Dupré and Messiaen, the symphonies of Widor and Vierne, the organ sonatas of Guilmant and Rheinberger, as well as a vast amount of isolated pieces.

As an organist, he has been performing both as a soloist or with orchestra or choir throughout the world. He is furthermore a well seen guest in juries for organ concourses or as professor at master-classes.

Ignace Michiels was often asked to perform for the Flemish classical radio 'Radio 3'. He also realised several own productions. 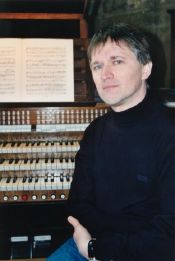