Int. highly acclaimed, Ludwig Albert belongs with the top flight of marimbists and has released 7 label albums showered with several tittles. His repertory exists mainly own works, arrangements, improvisations and first recordings of masterworks by significant composers such as Ms. Keiko Abe. He developed a style of his own due to unique musical combinations, all evoking a fascinating world. Since 1996 his career extends receiving invitations Worldwide for performances as a soloist for concerts & master classes at prestigious festivals and universities. After his graduation he studied with Keiko Abe and has been performing concert tours with her, several significant artists, ensembles & orchestra’s. He is professor marimba at the Belgian Royal Conservatory in Antwerp and holds a position as guest-professor at the Universidad Nacional del Artes in Chiapas-Mexico. He founded and is related as artistic director to the prestigious ‘Universal marimba competition Belgium’, his summer academy, the ‘Int.Keiko Abe academy’, the ‘Flanders Marimba Masters ensemble’ and as president of the P.A.S chapter Belgium. As Yamaha endorsing artist he performs always on the Yamaha 6000 concert marimba and astonishes his audience by his unique warm sound and as a world première by playing the marimba with 8 mallets. Ludwig Albert represents Yamaha Corporation Europe, Innovative percussion USA & Beurskens music editions NL. Well known and praised as an outstanding lyrical performer and pedagogue, he received several awards such as the percussion award of Honour 2001 and is praised by international press & media reviews with critics such as: extra ordinary clarity, excellent marimbist of the new generation, this is music of the purest water, his sounds penetrates in the hearts so naturally, He succeeds in giving the listener a view of the marimba’s prowess as a lyrical instrument and diminishing its reputation being only a novelty instrument , impressing! the overall excellence and superb musicianship of LA, Alberts marimba sounds very warm and throughout its register, Belgian artist at the top in the marimba-world…… . 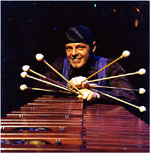