Barthold Kuijken studied transverse flute at the conservatories of Brussels and The Hague. Parallel with this training he developed a strong interest in early music and its historically informed practice on period instruments. As an autodidact he specialised in the traverso, taking his cue both from the old instruments, treasured in museums and private collections, as well as from the many 18th-century flute methods and handbooks on performance practice. As a chamber musician he performed with other specialists, such as his brothers Sigiswald and Wieland, Robert Kohnen, Gustav Leonhardt, Bob van Asperen, Ewald Demeyere, and Luc Devos. Barthold Kuijken can also be heard in solo concerts, as a member of several baroque orchestras, and increasingly also as a conductor. He is in great demand for master classes or as a jury member for international competitions. He made CD recordings of the most important works of the flute repertoire: from Hotteterre to Vivaldi and the Bach family to Debussy.

He teaches at the conservatories of Brussels and The Hague. Many of the renowned younger transverse flute players have enjoyed formative years with him.

In 2007 Barthold Kuijken, as musician, became the first Doctor in Music in Flanders (VUB) with the study "The notation is ot the Music - reflections on more than 40 years' intensive practice of Early Music".

Barthold Kuijken's conducting activities go back to 1986, when he was asked by Octophorus to conduct Mozart's Wind Octet and Gran Partita in concert (Bruges Musica Antiqua Festival) and for the subsequent recording (for Accent). Since then het regularly led period instrument orchestras such as The Orchestra of the Age of Enlightenment London), L'Arpa Festante (Munich), Accademia Montis Regalis (Mondovì), Arion (Montréal – concerts and recording for Atma), Queensland Philharmonic Orchestra (Brisbane), Concerto Armonico (Budapest), Mitteleuropäischer Chor und Orchester (Rovereto), Il Fondamento (Brussels), Les Folies françaises (Paris), Arte dei Suonatori (Poznan), I musici di Santa Pelagia (Torino), Ensemble baroque du Léman (Lausanne). Since 2002 he regularly collaborates with the Indianapolis Baroque Orchestra, serving as their artistic director and principal conductor since 2008.
Besides this he conducted numerous Early Music orchestral projects in major European conservatories, such as Brussels, Amsterdam, The Hague, Frankfurt, Genève, or for Musica (Peer).
His repertoire goes from Lully to Beethoven,  with special attention for the French orchestral suite (Lully, Marais, Rameau, Leclair, Telemann), the repertoire around the Berlin Empsindsamkeit (C.P.E. Bach, Benda), the Bach family (father and four sons) and the Viennese classics. He has frequently collaborated with singers (in Lully, Buxtehude, Bruhns, J.S. and J.L. Bach, Haydn, Mozart). Occasionally he also performs a flute concerto in one of his programs. 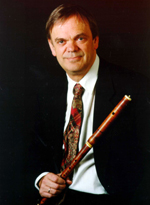