Korneel Bernolet appears as both a soloist and continuo player on several historical keyboard instruments. At age 19, he marked his international debut with La Petite Bande (Sigiswald Kuijken); from then on, he also plays with, amongst others, Scherzi Musicali (Nicolas Achten), CantoLX and B'Rock (Frank Agsteribbe) and the Mannheimer Hofkapelle (Florian Heyerick).

After completion of his piano training (with Paul Clement), he thus far received the highest honorific distinctions in harpsichord (Ewald Demeyere), conducting (Geert Hendrix and Luc Anthonis) and music theory at the Antwerp Conservatory Bachelor examinations. At the Amsterdam Conservatory and the Piccola Accademia di Montisi (Italy), he refined his historical keyboard playing with, amongst others, Gustav Leonhardt, Menno van Delft and Jesper Bøje Christensen. He attended mastercourses in orchestral conducting by Daan Admiraal and Georg Grün, and studied composition with Wim Henderickx.

Korneel has been selected as new harpsichord professor at the prestigious Flanders Operastudio (www.operastudio.be) besides his position as professor, accompanist and researcher at the Royal Conservatory Antwerp.

In 2014 he was awarded as Young Musician of the Year by the Belgian Music Press. 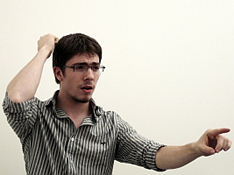