Yvan Vander Sanden was born in Neerpelt, Belgium in 1972. From 1990 until 1996, he studied music theory at the Lemmensinstitute in Leuven. He was also studying with Kurt Bikkembergs at that time.

After graduation, Yvan started teaching and was given an opportunity at his job to study information technology. During these years, he was very active in promoting the open source ideology in an educational environment.

In 2003, Yvan starts to combine his knowledge of I.T. and music, develops a strong interest in electronic music and writes two large works for choir and tape. In september 2004 he starts to study music again, this time taking composition classes with Godfried Willem Raes at the conservatory of Ghent.

Yvan also sings with the Capella Di voce, conducted by Kurt Bikkembergs. And since 2001 he conducts the vocal group Markant in Leuven. Markant is already known in Belgium for its original concerts and focus on contemporary music.

All his music can be downloaded from http://youngmusic.org 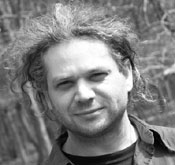