Hannelore Devaere studied the historic harp with Andrew Lawrence King at the Akademie für alte Musik in Bremen. She has a preference for the Italian and Spanish repertoire from the Renaissance and the Baroque. Her collaboration as a continuo player is often requested by ensembles at home and abroad: the Capilla Flamenca, The Gabrieli Consort and Players, Ensemble Elyma, Hespérion XXI, the Rheinische Kantorei, The Rare Fruits Council, the Ensemble Daedalus, Musica ad Rhenum, and so on. She also performs as a soloist and in that capacity made recordings both for radio and on CD. In addition Hannelore Devaere devotes herself as a musicologist to iconography and organology, with a focus on the 16th and 17th century. 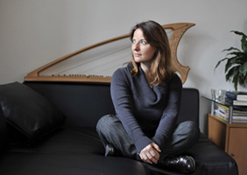