Janos Bruneel was born into a musical family and at age 6 he started to play the piano. When he was 15 he discovered the electric bass, which stimulated him to start playing jazz music and eventually the double bass at he age of 16. From then on, he studied at The Art Academy of Antwerp.

In 2001 he graduated cum laude and then followed an intense two-week-workshop in Cap Breton (France) with bass player Hein Van de Geyn. After this inspiring experience, Janos decided to continue his studies with Van de Geyn in the Royal Conservatory in The Hague, where he is now finishing his Master degree. Overthere, he also takes lessons from bass players Frans Van der Hoeven and Uli Glaszman. Meanwile Janos is finishing his Master degree in Brussels as well with Christophe Wallemme. Besides this, he had the opportunity to attend workshops with bass players Avishai Cohen, Furio di Castri, Philippe Aerts and Anders Jormin.

In the meantime Janos is playing regularly in Belgium and Holland. With his own band Vice Versa (winner of the national performing arts contest of the Dexia Bank Belgium in 2001) he played on Jazz à Liège Festival and in the Royal Operahouse of Brussels.

He won several awards with the Casimir Liberski Trio and was playing on numerous jazz festivals like Flageystival, Eu'Ritmix Festival and the Brussels Jazz Marathon.

Some of the other bands he plays with are the Music Theater Collective Vuurwals, the dance company San, and the Frits Bayens Big Band. With this last band, he shared the stage with John Clayton, Dee Daniels and Jim Mc Neely. Janos is playing with the international band As Guests since 2003. 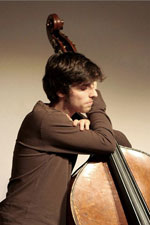