Rathé‘s composing and conducting activities have a special emphasis on contemporary vocal-instrumental chamber (-ensemble) music. For his inspiration he often taps into silence: he weaves his refined time constructs with sparsely placed tones.

"Morning light at 4 a.m. in Helsinki harbour. A Brazilian poem. Rothko’s paintings. The sound of waves on the pebbles of the beaches in Normandy.
Can the strength of wisdom explain the mysteries of beauty?
Subconscious associations generate continuously changing motions in body and mind.
Memory, future of our past. The present: never complete and always fading.
Music emerging from basic emotional gestures, an incomprehensible narrative translated into sound and seemingly irreversible time.
Association as a constructive plan, gestures for bricks, motion in/is time.
Every answer a question, every challenge one more opportunity." (Filip Rathé)

Filip Rathé graduated at the Conservatoire of Ghent for piano and conducting. Afterwards he specialized in conductorship with Laszlo Heltay and Pierre Cao and studied composition with Lucien Goethals. At the University of Ghent he acquired a Master Degree of musicology with professor Herman Sabbe. Today he is a lecturer at the Music Schools of Higher Education in Ghent and Antwerp, teaching musical analysis, contemporary chamber music and doing research on the music of Nicolaus A. Huber. Between 1992 en 2001 he directed the contemporary music choir “De Tweede Adem”. Since 1993 he is artistic leader of the SPECTRA Ensemble with which he conducted concerts in Europe and South-America premiering over 60 new compositions. He appeared as guest conductor of the Symphony Orchestra of Flanders, the Flemish Radio Choir, the Jeune Philharmonie and several contemporary music ensembles (Aquarius-ensemble, Hermes-ensemble, I Solisti del Vento).
His compositions include a.o.: Canção do Caminho (SSAATTBB; 1998), O ultimo poema (ensemble; 2001), Das Utopias (17 string players; 2003), Canção de vidro (16 voices; 2004); La velocidad de las Tinieblas (amplified voice and ensemble; 2005). At present he is composing for the Dutch ensemble ‘De Volharding’. His works were performed a.o. by the Flemish Radio Choir, ASKO (N), the SPECTRA Ensemble and the Collegium Instrumentale Brugense.

Since 2004 Musicological research on the work of Nicolaus A. Huber.

Since 1999 Professor of musical analysis and contemporary chamber music at Conservatory of Antwerp.

Since 1993 Artistic director and conductor of the SPECTRAEnsemble.Since 1989 Professor of musical analysis and contemporary chamber music at the Department of Music, Ghent Conservatory.

CANÇÃO DO CAMINHO(1998) for SSAATTBB. 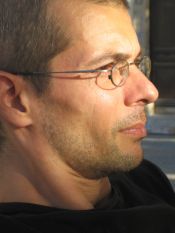