The Capilla Flamenca has been a household word in the world of early music for several decades already. The group borrows its name from the court chapel of the Emperor Charles V. The nucleus of the Capilla Flamenca consists of four singers: Marnix De Cat, Tore Denys, Lieven Termont and Dirk Snellings. Depending on the needs of the repertoire, this quartet is augmented with several singers, an alta capella (winds), a bassa capella (strings) or an organ. The continuously updated historically informed practice, in close cooperation with leading musicologists, results in unique programmes at the cutting edge. Their polyphonic repertoire regularly meets other musical genres or integrates several disciplines of the arts. Remarkable projects were, among others, the dance performance “Foi” by choreographer Sidi Larbi Cherkaoui, the acclaimed CD recording of the “Canticum Canticorum” in the Renaissance, the multi-media production “Eden” with video artist Walter Verdin, a musical zodiac according to the “ars nova” and Stockhausen, and “Rosa”, a pop song in Renaissance style, carrying the ensemble to the top of the hit parade. The Capilla Flamenca wants to propagate polyphony all over the world. It offers numerous concerts in Belgium and abroad and has been the recipient of countless awards for its CD recordings. 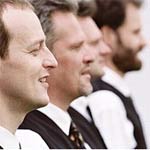