Dirk Brossé was born in Ghent and studied trumpet, contrabass and music theory at the Royal Conservatory in Ghent, and thereafter counterpoint and fugue at the Royal Conservatory in Brussels. He studied orchestral conducting with Lucas Vis and Anton Kersjes in Maastricht and with Prof. Julius Kalmar in Vienna. He received his diploma in conducting from the Musikhochschule in Cologne with Prof. Volker Wangenheim and in 1990 he was a finalist in Iwaki’s International Masterclass in Hilversum (Holland).
Brossé is frequently on the concert stage conducting all the major Belgian orchestras. He has guest-conducted with, among others, the London Philharmonic Orchestra, Elgin Symphony Orchestra of Chicago, Philharmonic Orchestra of Shanghai, Camerata St Petersburg and the National Orchestras of Colombia, Ecuador and Venezuela. In 1992 he composed La Soledad de America Latina for the official opening of the World’s Fair in Seville. In 1994 and 1995 he was Cultural Ambassador of Flanders and in September 1999 was music director of the Tokyo International Music Festival. Meanwhile he has remained active as a composer of music for films (important projects with Roland Verhavert and Stijn Coninx) musicals (Sacco & Vanzetti), and symphonic music (Artesia, The Birth of Music). In fifteen years he composed more than one hundred pieces.

Dirk Brossé teaches orchestral conducting and composition at the Royal Conservatory in Ghent.

From 2010 Dirk Brossé is director of the Chamber Orchestra of Philadelphia. 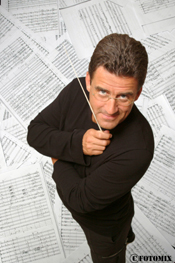