Wim Henderickx has been composing chamber
music, orchestral works and opera. His scores are characterized by a solid structure, changing colourful sonorities and an intense expressive power. Sources of inspiration are often non-Western cultures and Oriental philosophy.

Wim Henderickx studied composition and percussion at the Royal Conservatoire of Antwerp (BE). He took part in the ‘Internationale Ferienkurse für Neue Musik' in Darmstadt and attended sonology classes at Ircam in Paris and at the Conservatory of Music in The Hague. His scores are published by Norsk Musikforlag in Oslo. He teaches composition at the Conservatoires of Music in Antwerp and Amsterdam and is also the main teacher of the Summer Composition Course SoundMine for young composers. His oeuvre includes chamber music, opera and symphonic work and he was awarded for his work in Belgium and abroad. Since 1996 Henderickx is Composer in Residence for Muziektheater Transparant and in 2013 he joined the Royal Flemish Philharmonic (deFilharmonie) as Artist in Residence. Following a trip in India and Nepal he wrote the Tantric Cycle (2004-2010), seven compositions with the Orient as a source of inspiration. Wim Henderickx was commissioned to write Canzone for voice and piano for the semi-finals of the 2008 Queen Elisabeth International Music Competition in Brussels. For the Orchestre National de Belgique he composed Symphony No.1, with premieres in Belgium and abroad by various orchestras. Visioni ed Estasi for mixed choirs and electronics premiered at the Flanders Festival Mechelen for TENSO Days 2015, with 200 singers conducted by James Wood. With HERMESensemble he produced the CDs Disappearing in Light and Triptych. The Royal Flemish Philharmonic recorded most of his orchestral works, the 3 Ragas were released in 1999, Tejas & other orchestral works in 2011 and a new double CD was released in March 2016 with Symphony No.1, Groove! and the two versions of Empty Mind I.

Key works:
VISIONI ed ESTASI (2015) for mixed choirs and electronics
ANTIFOON (A Resonating Bridge) (2014) for multiple orchestras, wind bands, choirs, ensembles ad lib., carillons
and two solo voices
OBOE CONCERTO (Empty Mind I) (2014) for oboe, orchestra and electronics
DE KONINGIN ZONDER LAND (The Queen without a country) (2014) for music theatre
ATLANTIC WALL (2012) for mezzo-soprano, instrumental ensemble, video and electronics
GROOVE! (2012) for percussion and orchestra
SYMPHONY N°1 (At the Edge of the World) (2011) for orchestra
MEDEA (2011) for music theatre
TEJAS (What does the sound of the universe look like?) (2009) for orchestra
DISAPPEARING IN LIGHT (2008) for mezzo-soprano, viola, alto flute and percussion
CANZONE (2007) for voice and piano
VOID / SUNYATA (2007) for music theatre (5 singers, instrumental ensemble and electronics)
OLEK SCHOOT EEN BEER... (2006) for narrator and ensemble
NADA BRAHMA (2005) for soprano, instrumental ensemble and electronics
THE SEVEN CHAKRAS (2004) for string quartet and electronics
CONFRONTATIONS (2003) for African and western percussion
ONLY DARKNESS AND SHADOWS (2003/orchestrated in 2004) for soprano and ensemble
ACHILLEUS (2002) opera for young people
TRIUMPH OF SPIRIT OVER MATTER (1999) opera
RAGA CYCLE: RAGA I for percussion and two pianos (1994), RAGA I for percussion and orchestra (1996),
RAGA II (Tombeau) for orchestra (1995) and RAGA III for viola and orchestra (1995)
LE VISIONI DI PAURA (1990) for orchestra
MYSTERIUM (1989) for 10 woodwinds 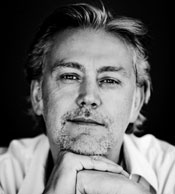